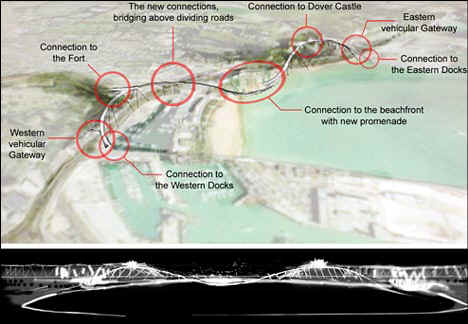 Posted by Concept Landscape & Urban in Competitions On Nov 03 2013

An old article that I came across, featuring yours truly, pasted from here

Ideas from the best of the 70 entries will now be used to work up a bid to the National Lottery in January. If successful, the bid would then be given £250,000 and a year to develop a scheme with the local community to compete in the People’s Millions telethon.

The second place prize of £3,000 in the public vote went to designers craft:pegg for Dover Lines, a project to re-create the town wall. Third prize of £2,000 was won by architects Blackwell Friend for three projects – the White Cliffs walkway and vertical link and the Dover Arc, a bridge link between the docks which removes lorries from the waterfront.

After the award ceremony, KCC Head of Regeneration and Projects Caroline Lwin said: “We have had a fantastic response. What this competition has been about is getting the design world interested in Dover and the community interested in design. This is just the start, not the end of the process.”

KCC Cabinet Member for Regeneration and Supporting Independence Graham Gibbens said: “Some of the country’s best design talent entered our contest. They gave real added value to our efforts to do something positive for the local community.”